On a day in May I see her in a big cardborad box, in the middle of our bathroom and my squeal of surprise was aimed at the tiny creature, a bambi, whom Frank had slightly injured while mowing the lawn.  It was named after the spring month of May.  By the end of the day, my son Michel had rid it of 50 or so ticks, and it lay nearly motionless, barely a few days old.

I had a feeling that the first night would be crucial, so the two of us spent it in the lounge, with the little fawn lying on my tummy (just around the navel is the centre of our energy).  It fell asleep almost lifeless, but it got back on its feet in the morning.  I ended up with a damp towel on me, with little turds all over, but the joy when I saw that spark of life in its eyes was indescribable.  All avenues were open now. 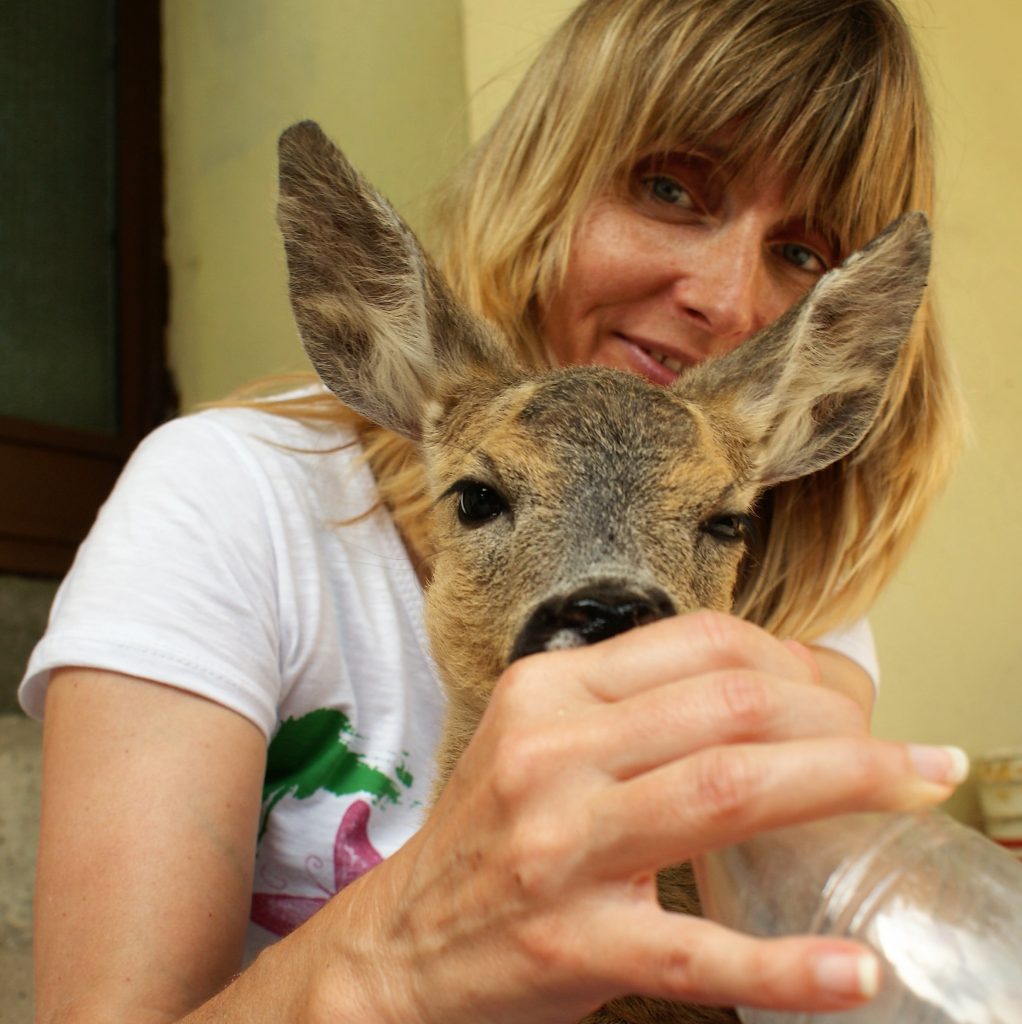 In the next few days Frenk and I were bottle-feeding our friend every four hours, taking utmost care, with Frenk on duty even during the night.  In the first week, our dog Raf was reluctant to share his favourite armchair with the competitor and was relieved when May moved out into the garden.  Whenever Frenk or I were in the garden or we invited him into the house, May shadowed us, but it could not trust anyone else, not even kids.

The enthusiasm over the first vegetable meals was spoiled by a severe diarrhoea, because the cow’s milk was not diluted enough.  Determined to overcome this new difficulty, I obtained antibiotics, minerals and goat’s milk powder – feeding May medicines every two hours over the weekend so by the beginning of the following week we saw the first proper turds.  Victory. 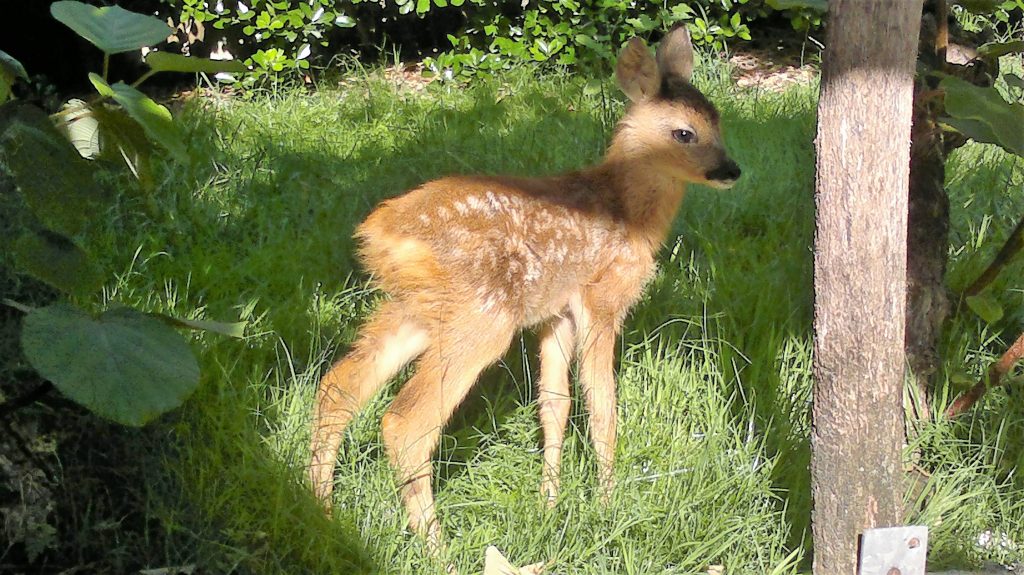 Only Frenk and I were allowed to feed May, so we gave up our seaside holidays at the end of June.  But it wasn’t hard.  When May cast its gentle eyes, embellished with long eyelashes, there was simply nothing in the world that mattered more.  Luckily during the holidays May accepted Rebecca so Frenk and I could enjoy a 4-day break away.  Many sms messages were exchanged, on the familiar topic.

Our garden became too small for May’s increasing movements, for its powerful jumps.  Every day it had freshly plucked grass (only certain kind, by its own choice) but May would not give up the bottle, even if it’s down to four times a day.

Where there is a will, a heartfelt goodwill, there is a way, so we got to meet wonderful, kind people living on a farmstead by the edge of the forest, who agreed to adopt May.  May turned out to be Maya, we realised it was a female.  The farewell was, put mildly, awful.  We head her call and cry after us as we were walking to the car.  Heartbreaking.  We returned home speechless that day, unaware that worst was yet to come.

The following day the new carers told us that May jumped over the fence that morning and ran into the forest.  The hours at work, and hours in the car late in the afternoon all the way back to the farmstead were torture.  But I was hoping with all my heart that we would find her.  The looks on the carers’ faces did not give much hope.  Frenk and I chose to search in different directions (luckily they saw which way she ran off).  After ten minutes of wandering and constantly calling her name, she ran to me.  Tiny, scared, with those big brown eyes.  Straight into my arms, tears just flew down my cheeks.  She would not let me carry her, chose to walk behind me squeaking, like a cub calling after its mother.  We were all ecstatic when she ate her first meal that day.  I hung a little bell around her neck before leaving her again. 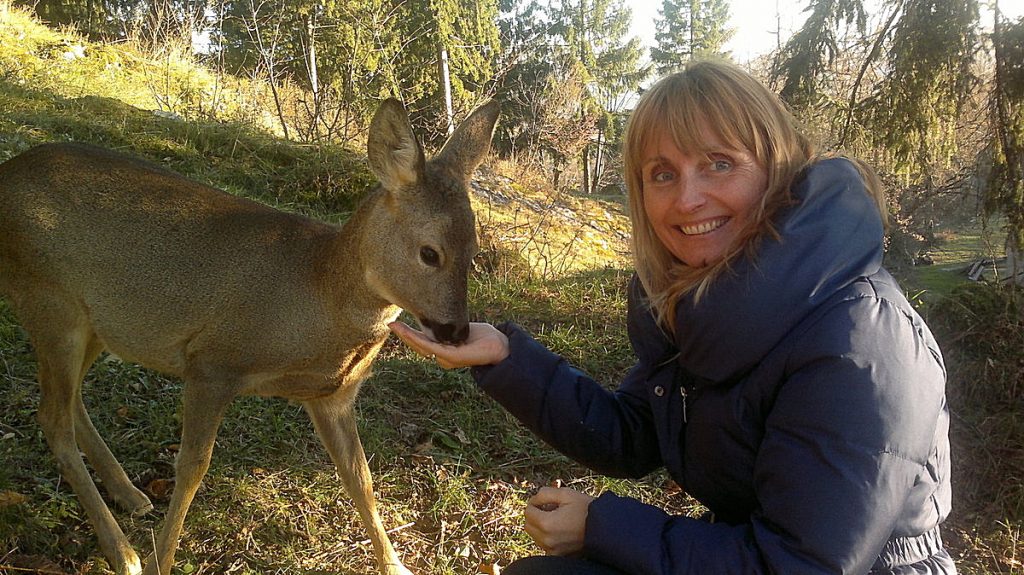 We had to sneak away to the car while Maya was behind the house with her carer.  Big mistake.  As soon as she realised we were not there, she ran off again.  We searched for her until dark but could not hear her little bell.  Like in a worst nightmare.  Before going to sleep that night, I was praying that Maya would not fall easy prey to a fox.  The next morning Frenk went back to the farm (1 hour’s drive from us) and found her after half an hour, thanks to the bell.  The farmers had heard the bell early in the morning but she did not approach them as she did not know them.

This time she was put inside a 2-metre high fence and all inclusive care of caring people to spend the first days of August there.

I missed her day after day.  Every day.  I missed seeing her first thing in the morning through our bedroom window, on the spot in the garden where she used to lie in the first sun.  She could always sense I was looking at her and turned her gentle eyes my way.

We went to visit her in September and she recognised us, let us cuddle her, just like when she was still living with us.  But the best thing was knowing that the new carers were totally devoted to our princess.  She embraced both feminine souls. 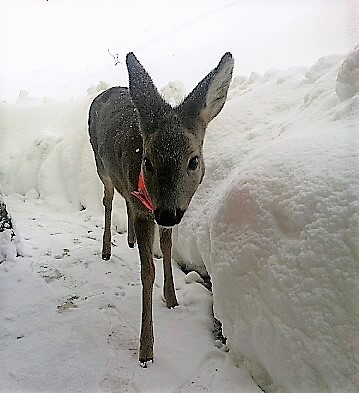 Today we went to see her, and our princess has turned into a gentle and shy lady, but she stole her carers’ hearts completely.  They still spoil her with a bottle of warm milk, and with carrots and corn.  And plenty of cuddles and nuzzles.  I will be forever grateful to them.  She made friends with the sheep dog and the cat, who she shares her walks with alongside her carer.

So this is my story about unconditional love, full of twists, chaotic and critical moments but with a happy ending.

This website uses cookies to improve your experience while you navigate through the website. Out of these, the cookies that are categorized as necessary are stored on your browser as they are essential for the working of basic functionalities of the website. We also use third-party cookies that help us analyze and understand how you use this website. These cookies will be stored in your browser only with your consent. You also have the option to opt-out of these cookies. But opting out of some of these cookies may affect your browsing experience.
Necessary Vedno omogočeno
Necessary cookies are absolutely essential for the website to function properly. This category only includes cookies that ensures basic functionalities and security features of the website. These cookies do not store any personal information.
Non-necessary
Any cookies that may not be particularly necessary for the website to function and is used specifically to collect user personal data via analytics, ads, other embedded contents are termed as non-necessary cookies. It is mandatory to procure user consent prior to running these cookies on your website.
SAVE & ACCEPT
error: Vsebina je zaščitena pred kopiranjem.